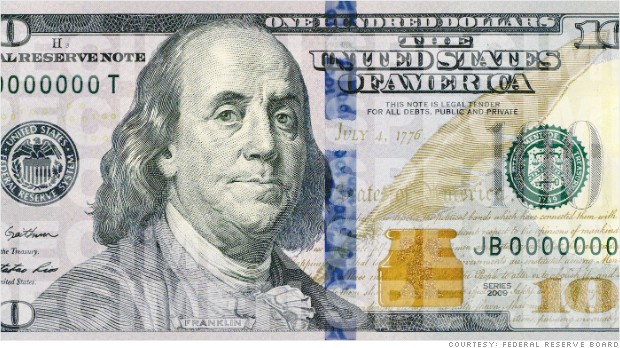 In the next few days, the new US $100 bill will begin to circulate as the past bill is phased out. While this is excellent news for those who have trouble verifying the validity of these bills, counterfeiters will not be too happy.

Luckily, the Federal Reserve Board was one of the essential offices that stayed open during the government shut down as they were around to announce the chunk of new security features built into the $100 bill. A few will be incredibly easy to spot, such as the 3D security ribbon that runs through the bill, and a Liberty Bell that changes color depending on the angle and warmth of the spot.

The security ribbon is bright as day, making the bill very easy to validate, but very hard to replicate. The security ribbon is exactly what it says it is: ribbon braided through the paper and fabric of the $100 bill. When held at a certain angle, the ribbon appears to have bells on it. At a different angle, you can see “100s” instead. When the bill is tilted side to side, the bells and the 100s move side to side as well.

Larry Felix, Director of Engraving and Printing, says the 3-D security ribbon is “magic,” and is made up of “hundreds of thousands of micro-lenses in each note”, adding that this is “the most complex note the US has ever produced” in his interview with the Associated Press.

Some of the security features from the old bill do remain, such as the security thread and the color-shifting 100 in the right hand corner of the bill.

The redesign of the $100 bill has been coming for a very long time, according to the Federal Reserve. In fact, it’s been perfecting and changing the new features for close to a decade because of the high counterfeit rate of the US $100 bill inside and outside of the United States. The design, as it was released today, has been around since 2010. However, production delays and lack of funding have made the note unavailable until now.

The $100 bill is just the first in a long line of changes that include the $5, $10, and $20 bill, but there is not currently a release date on those remodels just yet.

Expect to see a new $100 bill within the next few weeks, especially if you deal a lot in cash. Banks can begin ordering the new bills next Tuesday, but it may take weeks or even months before the bill is seen by many.