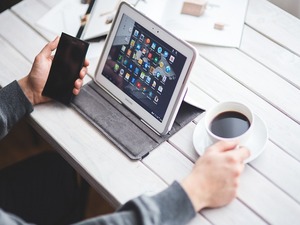 Ransomware is becoming an epidemic. It’s one of the fastest growing kinds of attacks we’re seeing in 2016, and the hacking community has shown a tremendous appetite for expanding the scope and scale of their operations.

PCs and laptops were, of course, obvious targets for this kind of attack, but we’re now seeing strains of ransomware that can attack smartphones, and lock you out of them, just like the software locks you out of your PC. There’s even at least one strain of ransomware that targets smart TVs.

Of course, for these types of software to work, the user has to be tricked into running the poisoned app and giving it administrator permissions, but there are tried and true methodologies for doing so. Granted, this extra step means that fewer of these types of devices will be impacted, but the hackers wouldn’t be doing it if there wasn’t money in it.

The answer, at least for most people is “quite a bit,” which explains why we’re starting to see these new strains. Unlike PCs, many people don’t put much thought, time, or effort into backing up the data on their phones. Sure, you can revert to factory settings without paying, but of course, then you’ve lost everything anyway. Where your Smart TV is concerned, almost nobody gives backups on that front a second thought, because until recently, nobody ever considered that a hacker would engineer malware that targeted them.

The reality, however, is that hackers will target anything if they think they can profit by doing so. Literally nothing is safe. If you have a smart device, and you don’t want to lose it or see it turned against you, you’ve got to spend some time and effort protecting it. That’s almost always going to include giving some thought to a robust backup system.