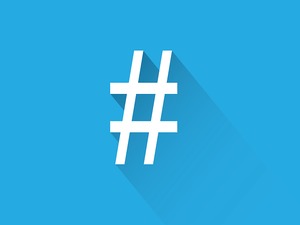 Not so long ago, hashtags were the talk of the town. Every social media platform began to allow them – namely Facebook and Instagram, after Twitter made them an integral part of social communication. However, like every trend in social media, hashtags began to be used less often in productive ways, especially by companies. While many people still use hashtags, they have begun to mean something completely different than they did when they were first introduced and were a novel way to communicate.

Though the hashtag has changed much in the past few years, it does in fact still carry importance when it comes to branding, social reach, and marketing.

So Wait…What is a Hashtag Again?

There are so many social media trends that one can be hard to remember over another. A hashtag is simply a word or phrase that’s hyperlinked (by putting # in front of it, like #smallbusiness) automatically. The hyperlink goes to all of the posts that other users, companies and pages have made public using the same hashtag. In addition, Google now counts hashtag searches, and if someone looks for your hashtag your post could pop up. You never know who might come by and want to look at all of the posts under a certain hashtag and see your post. The greatest thing about hashtags is that they are completely free to use.

Where Should I Be Using Them?

At this point, almost every social media channel uses the hashtag system, and every social media channel leads to different landing pages (no cross-platform hyperlinking, unfortunately). You should be using them everywhere, especially on Instagram, where their use is particularly potent. People browse hashtag categories on Instagram all of the time looking for new and interesting photos in a certain category, and since it’s easy to browse hundreds of thumbnails at a time, it’s a good time-killer for bored Instagramers (which means more potential business for you). Those who use hashtags on social media engage 2-3 times more users just because they used a simple hashtag.

Hashtags are Still Relevant, but Don’t Overuse Them

Hashtags had a rise and they had a fall, and even though they are still relevant, people don’t click or tap on them as much as they used to. This means that tagging a photo or a post with fifty different hashtags isn’t as effective anymore; it just looks like a bunch of tag spam, and no one actually reads the tags but rather skims over them with a glance. Instead, you must focus your hashtags to ensure that the right ones are being used to ensure the furthest possible reach on social media. Plan on using around 3 tags on every social media channel, and you can use handy tools like hashtagify.me to research hashtags and see which might be “trending” and good for you to use.

Hashtags have fallen from grace in a few ways, but that doesn’t mean you shouldn’t still be using them. With a targeting tool and some well-thought out hashtag campaigns, you could be seeing more business almost immediately just from using a pound sign in front a few words.