Negotiation is more art than science, but it is an art that anyone can learn. Most people go into a negotiation with a firm idea of what they want, and a laundry list of “stuff” they’re willing to give up to get the things they want. That’s fine as far as it goes. You can do that and be at least moderately successful at the negotiating table, but have you ever watched someone who just seemed to be a natural at it? Who just seemed to be able to dance from one point to the next and never get touched or flustered or baffled? At the end, odds are that that’s the person who walked away with exactly what he wanted. Here’s how you can be that person.

Know What The Other Guy Wants

This is pure game theory, and specifically, it’s the metagame. It’s not enough to “just” make a list of your own goals and possible concessions. You need to understand what your opposite number wants, and what is driving that desire. It would be helpful if you could suss out his likely concession offers before hand. Knowing these things gives you a powerful advantage. I’ll give you an example.

Let’s say that you and I are negotiating on the price of a piece of land in North Carolina. I own the land, and you want it. I happen to know that the reason you want it is because you’re going to build a vacation home for your family, and that you’ve got two small children. The most important aspect of the land is that you want the camper I’ve got sitting on it, because you plan to live in it while you’re having the house built.

The camper means nothing to me, but since I know it’s a crucial point for you, suddenly it’s important to me. I’m not sure if I can give that camper up, you see. Well, I mean…I’m sure you could convince me by giving me an extra concession or two.

You see how that can help your game.

The Awful Power of Silence

There are few things more powerful, profound, or uncomfortable than silence. Going back to the example above, let’s say we work out the details on the camper, and I get you to agree to pay the closing costs on the sale in exchange for it. Very well, and then you make your offer. “I’ll pay you $65,000 for the land,” you say.

Absolute silence that seems to stretch out forever.

I didn’t lift a finger, and I got you to come up another five grand. Silence is such a powerful weapon that you must use it sparingly in negotiation, and only during the most pivotal phases. Overused, and you make people leave the room, they get so uncomfortable.

Always, always, always bring a notebook or paper tablet and a pen to the negotiating table. When someone says something or makes an offer and you need to buy time to mull it over, write something down. It doesn’t matter what. It could even be the list of groceries that your wife wants you to pick up from the market on the way home. The point is, your opposite number at the negotiating table doesn’t know that. What are you writing? Why? Now he’s thinking very hard about that, and it buys you time to consider whatever it was you were asked. It puts the advantage back in your court.

These are simple tricks, but they can be used to tremendous effect in negotiations of all sorts. Try them and see. Just go easy on the silence.

Chromebooks are fun, cool machines that are incredibly popular with students, hipsters, artists, and

When Only A Fax Will Work

Quite often when you’re sending files from one place to another, a simple email attachment or 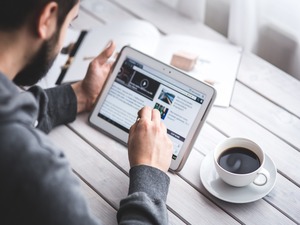 Ways You Can Appeal to Tablet and Mobile Phone Audiences