Five Ways To Speed Up Your Laptop’s Performance

Speed is everything in the world of computers. When you first purchased yours, however long ago that might have been, it probably dazzled you with its speed and performance. Even the biggest, hairiest applications could be opened with ease. You could surf the web with ten, fifteen, twenty or more tabs open at the same time and barely notice a dip in system performance.

Then time passed and began to take its toll. It seems like the more you use it, the worse things get. Ultimately, your new, fast computer begins to look a bit like that rusted out El Camino sitting on blocks you pass once in a while as you’re driving through the country, and you wonder what the heck happened. You’re in luck though, because there are some fairly basic steps you can take to restore your computer to its former, blazing glory. Here’s what you want to do:

When you install a new program, it’ll probably ask you if you want that program to run on system start., and sure, why not? It’s a good program. You wouldn’t be installing it otherwise, so yes. Let’s let it run at startup. Then you install something else. Then another program, and still another, and they’re all good, so you let them all start automatically on startup.

The problem is, of course, that all those programs require system resources, and the more programs you’ve got running on your computer at the same time, the fewer resources your computer has to apply to the applications you’re actually using. Minimize the number of programs you have set to run at system start. If you need something, open it manually and close it when you’re finished. This alone can boost performance significantly.

Uninstall Apps You Never Use

Hand in hand with the above, it pays to do a periodic check of applications installed on your PC that you just don’t use any more. If you’re not using it, get rid of it. Not only will you free up disk space for the stuff you do use, but you’ll also clean up your system’s registry, which will help with performance.

Right now, Google Chrome is the fastest browser with the smallest footprint on the market. Use it. Uninstall them, or leave Firefox as a backup browser in the event that something goes wrong with Chrome. In addition to this, periodically delete your history and cache files, or set it up to auto delete at some interval you select. That will help keep your system free of unnecessary clutter.

This is proof positive that too much of a good thing can become a bad thing. Having one good anti-virus program running is great. Absolutely recommended. Having two or more running? Not so great. Pick one, leave it running, and uninstall the rest. When you’ve got several running in tandem, your system can slow to a crawl when they all start doing simultaneous virus scans, and sometimes, having multiple packages running can create conflicts which can really bog your system down.

You should defrag your hard drive at least twice a year. More often than that, depending on how much data you’re pushing through, then taking back off. A badly fragmented hard drive can slow down the time it takes for your computer to actually access and display a given file or piece of information. Periodic defrags eliminate this problem. Note though, that this is usually a fairly long process, so kick it off before bed and let it run all night.

With Windows 10 slated to be released in a few short months, many businesses are wondering if they s 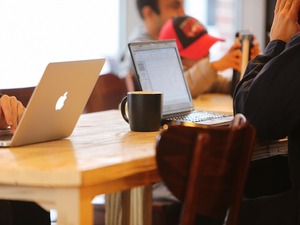 You’re Using the Cloud and Didn’t Even Know It

A fair number of business owners are somewhat hesitant to embrace the cloud. That’s understandable

Do Macs Suffer from Malware Attacks?

There is a myth that abounds in the world of Mac that has been encouraged by Apple: Mac users don&#8